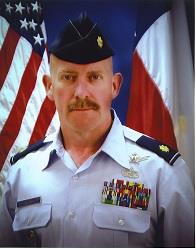 Major Laughery was born September 1961 in Tacoma, Washington.  He started his Air Force career in August of 1980 when he enlisted as a Security Policeman after one year of college at Chipola Jr. College in Marianna, Florida.  As a Security Policeman he was stationed at Kunsan Airbase, Republic of Korea.  There he was charged with the security of all priority resources on the airbase.  After his short tour in Korea he made his way to Kirtland Air Force Base (AFB), New Mexico.  He spent two years there where he performed such duties as dignitary personal security, priority resource protection, and airbase ground defense.

The remainder of Major Laughery’s assignments started after he cross trained into the intelligence career field.  After graduating with honors from the intelligence school he was selected to serve at the Pentagon where he was the Air Force’s chief human intelligence requirements manager and served on the President’s commission on terrorism where he played a part in the targets selection for Operation Eldorado Canyon which struck Libya in 1986.  After his time at the Pentagon he served at Strategic Air Command headquarters in Omaha, Nebraska where he tracked Soviet space programs.  From there he returned to Korea where he was in charge of tactical deception operations on the peninsula.  Upon return to the states he barely unpacked at Myrtle Beach AFB, South Carolina before he deployed with his A-10 Warthog squadron to Saudi Arabia in support of Operation Desert Storm.  His main duties consisted of briefing and debriefing pilots before and after their missions and tracking Iraqi activities.  His next assignment brought him to Peterson AFB, Colorado.  Here he was selected to work with the Space Control mission which guarantees our access to space while seeking the means to limit our enemies that same access.  It was during this assignment that now Technical Sergeant Laughery was selected to attend Officer Training School to become an officer after graduating from the University of Nebraska at Omaha with a Bachelor’s degree in Criminal Justice and an Associate’s Degree in Intelligence and Imagery Analysis from the Community College of the Air Force.  Upon graduation as a 2nd Lieutenant he returned to his same position at Space Command.  Upon putting on 1st Lieutenant he was transferred to Barksdale AFB, Louisiana where he became chief of the threat analysis branch.  During this tour he was again redeployed to Saudi Arabia where he was tasked with moving the intelligence functions from Dhahran Airbase out to Prince Sultan Airbase following the bombing of the barracks at Khobar Towers.  Major Laughery’s last assignment on active duty saw him serving as the chief of an Information Warfare Support Team.  These teams are tasked with defense of critical networks serving our bases worldwide.

Along with his extensive operational assignments Major Laughery also had two special duty assignments.  He served at Goodfellow AFB, Texas as the chief of their wargames department for the intelligence school.  He also served as an instructor at Maxwell AFB, Alabama at the Squadron Officer College and the Air and Space Basic Course.

Major Laughery is the proud father to two boxers, Buck and Bo, that keep him very entertained.  Major Laughery lives in Bergheim, Texas and works in the best school district in Texas—Boerne Independent School District!