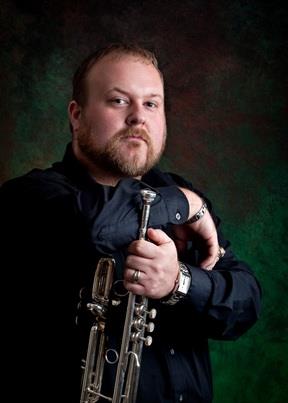 Jonathan Rickman, a native Texan, has been recognized by many as a top-call Lead Trumpet player and music educator in the San Antonio and Austin area, and is a prominent fixture in the area's music scene. Jonathan received a Bachelor's Degree in Music Education from Texas State University in San Marcos. Jonathan frequently tours throughout Texas performing Big Band Era Swing, Latin Jazz, Merengue, Salsa, Soul, Funk, Tejano, and Rock, as well as many classical styles with Symphonies and brass quintets throught Central and South Texas.

Jonathan has been featured as a guest artist for the Texas State University Orchestra, Wind Ensemble, and Jazz Orchestra on several occasions. Jonathan has made several appearances at venues throughout Texas and the United States, including the numerous Jazz Festivals, the Las Vegas strip, and the Notre Dame Jazz festival, where has been named "Outstanding Lead Player," and awarded for "Outstanding Range."

Jonathan was named as a one of eight national quarterfinalist nominees from Texas for the 2019 Grammy Music Educator Award.

Jonathan also enjoys spending time with his lovely wife Kara, who is also an educator and musician. Kara and Jonathan have two beautiful girls named Kennedi and Presleigh. The family enjoys their time together at their ranch home, playing with their Austrailian Shepard "Bailey",  and taking trips in their Jeep.