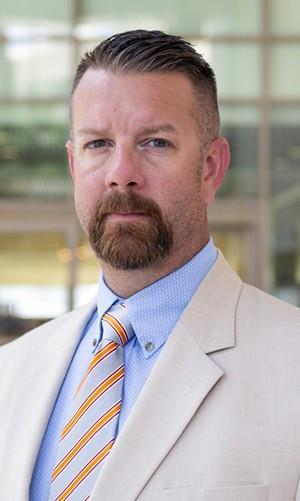 Robert Churchman enters his 2nd season with Boerne High School as a geography and health teacher.

Coach “Church” Churchman comes to Boerne ISD. from the University of Texas Permian basin where he coached the tight ends and served as the Director of Football Operations for the UTPB Falcon Football program.

For both the 2016 and 2017 seasons, Churchman was the Director of Football Operations at the University of the Incarnate Word in San Antonio, Texas for Head Coach Larry Kennan.

Prior to joining UIW, Coach Churchman served as the special teams coordinator and Director of Football Operations at East Texas Baptist University for three seasons under Head Coach Joshua Eargle . Churchman helped the Tigers to an American Southwest Conference Championship in 2015, the first for the program since 2003.

Before he started his coaching career, Coach Churchman was a civilian contractor with the U.S. Army Corps of Engineers as a construction representative during the reconstruction and expansion of the U.S.  Army's premier medical facility in the United States, SAMMC (San Antonio Military Medical Center), at Fort Sam Houston, Texas.

Originally from Bulverde, Texas he is a graduate of Smithson Valley High School.  Coach Churchman went on to receive a Bachelor of Science degree in Kinesiology and Sport Science from Sul Ross State University in 2013 before completing his Master of Education in Sports Science and Leadership from ETBU in 2014.